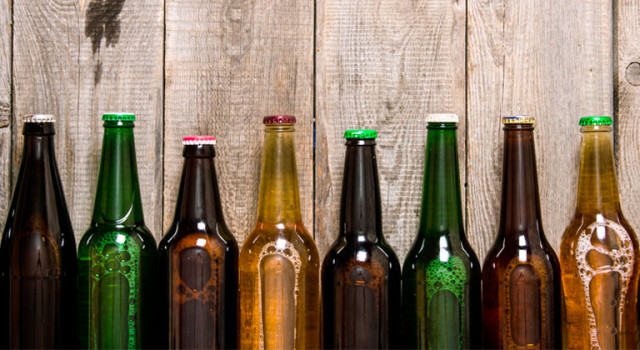 The history of the beer bottle

How much thought do you give to your beer drinking vessel? Have you noticed that beer bottles vary in color? Let’s review a little history on beer bottles.

Why are beer bottles brown and green?

Bottled beer became popular around the 19th century because brewers thought it was the best material for keeping beer fresher longer. Beer producers soon learned that clear glass bottles weren’t ideal for beer, because bottles left out in the sun would quickly smell and taste offensive. As most of us now know, UV rays permeate beer and give it that skunky taste. In the brewing industry, they refer to this as “lightstruck.” To solve this problem, beer producers began using brown beer bottles to shield their beer from the sun’s rays, similar to you and I popping on sunglasses on a sunny day.

Green bottles entered the beer scene around WWII because the materials needed to make brown bottles were in high demand. Companies swapped out their brown glass bottles for green, not wanting to stick high-quality beer back into poor-performing clear bottles. As a result, beer consumers began to associate green bottles with higher-quality beers. The trouble with the shift was that green bottles don’t do a great job of blocking out the sun’s rays. However, some producers used green bottles for so long that it became part of their identity and it was tough to switch back.

Fast forward to today, and we have brown, green, and clear bottles on the market. Some glass suppliers apply clear, UV protected coats to glass to keep beer fresh, so the color of your bottle isn’t always an indication of its susceptibility to skunk. That said, knowing that light is an enemy of beer, it’s best to keep your bottles in a dark storage container to keep your beer from skunking. That’s some practical advice for next time you’re at a beach, barbeque, or tailgate with a stash of beer.

You can expect the freshest draft beer at The Tap. And we have a variety of containers to choose from so you can take your beer with you around Ponce City Market. And now you know to go for our brown bottles if you're headed out to the Roof at Ponce City Market.